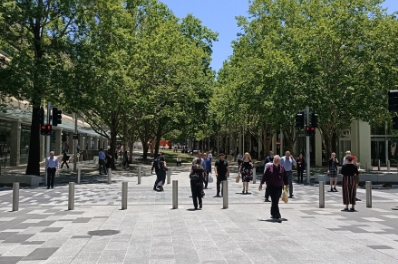 Akuna Streetscape improvements are now complete with the final phase, upgrading the busy pedestrian crossing at City Walk and Akuna Street, reopened for public use.

Works in Akuna Street, which began in late 2018, have included new footpaths, trees, lighting, landscaping and a raised pedestrian crossing. This work has upgraded the previous 50-year-old verges to create a street that is now safer, more attractive and easier to move around.

Improving walkability is a key component of our city renewal program. By raising pedestrian crossings we are helping to slow down the vehicle traffic on and around Akuna St, making it a safer and more enjoyable experience to walk through the city. A 2017 travel survey[1] found that the average Canberran walks for 11 minutes a day – our city renewal program supports Canberrans to increase the amount of walking they do around our city centre.

The Akuna Street works were among a series of public space upgrades starting with footpath upgrades to London Circuit, between Bailey’s Corner and Akuna Street, and continuing with upgrades to Mort Street, Civic, which are expected to be completed in early 2020.

Work will start next year on public space upgrades in Braddon, Dickson and Haig Park, consistent with the place plans developed for those areas. 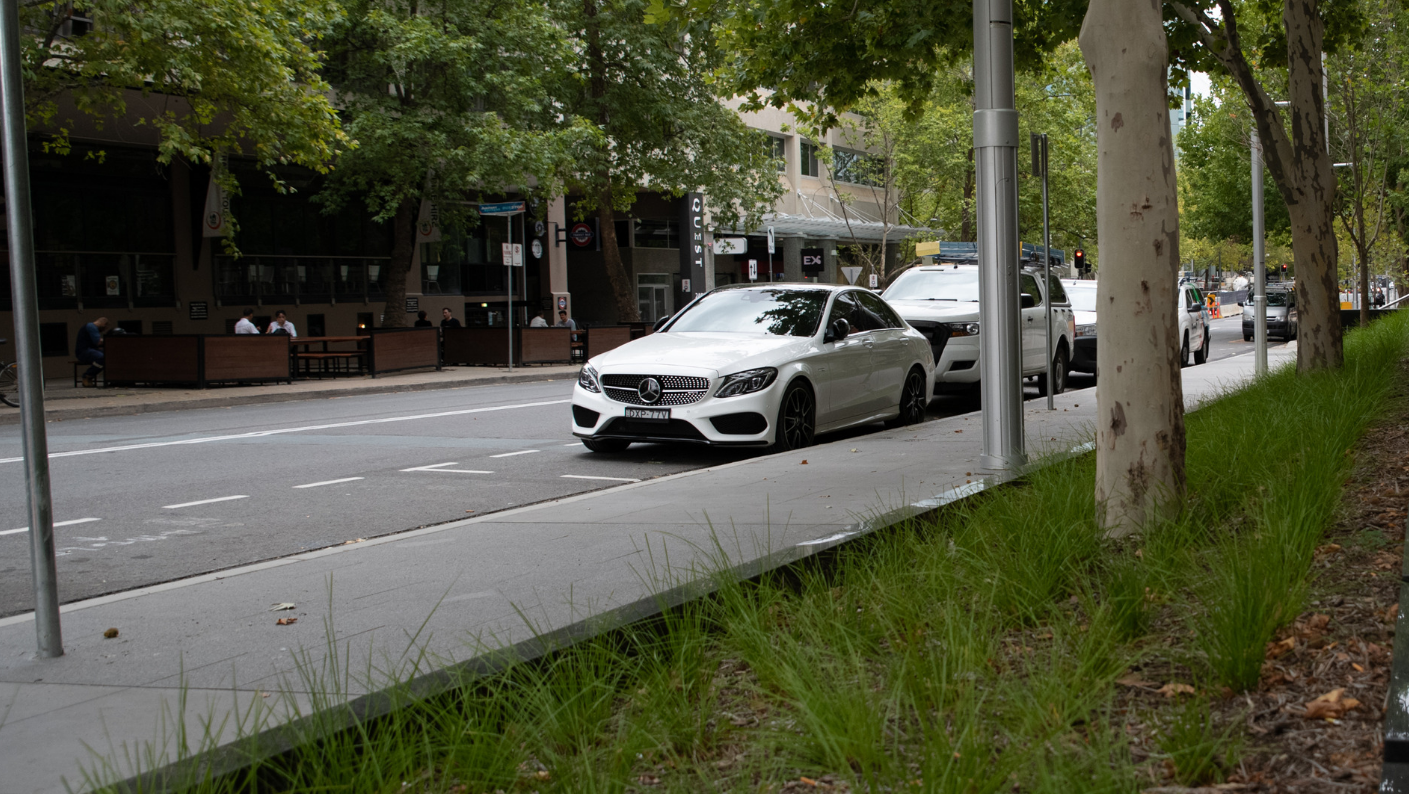 Works in Akuna Street are one step closer to completion, with new footpaths in front of the Myer building and in front of the Transit Bar now complete. New paving, streetlights and landscaping are welcome additions to this space, creating a safer and more attractive path for the community to use.

The final construction phase along this street will upgrade the busy pedestrian crossing at City Walk and Akuna Street, with work beginning in late July and expected to be complete in November 2019. The works will be undertaken in two parts with part one requiring a partial road closure from now until the end of September 2019. Lights at the crossing will be operational at all times, with minor diversions for pedestrians who will be able to cross either side of the works during this time. Part two of the works will require a full road closure for the entire month of October 2019. Local traffic will be allowed access at all times with turning bays and diversions in place on either side of City Walk.

We thank you for your patience when travelling through this area. 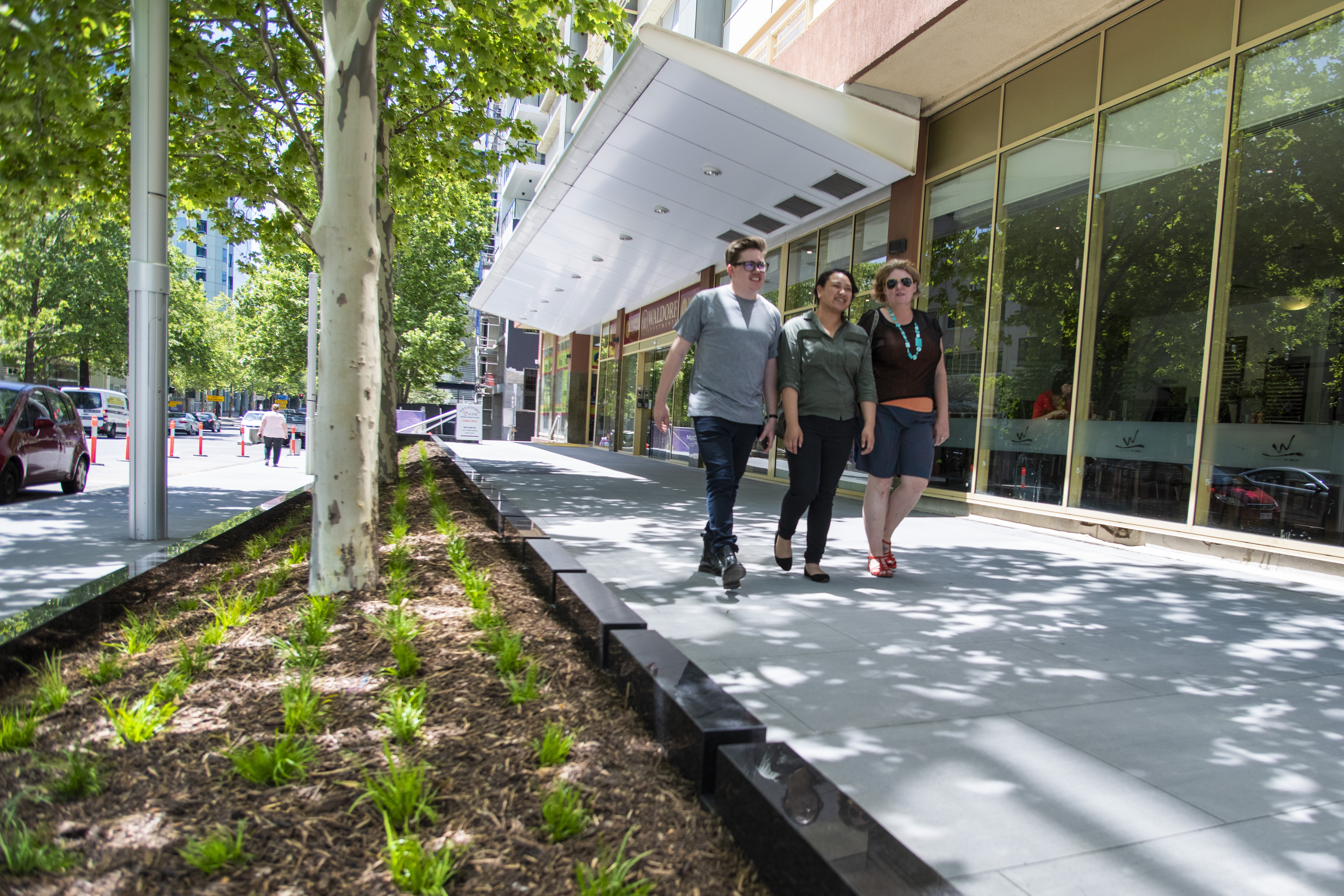 Thank you for your continued patience as we undertake the next stage of streetscape upgrades in Akuna Street.

Work on the western side of Akuna Street was completed late last year and included new paving, streetlights and landscaping.  We’re now undertaking work on the eastern footpaths and are committed to staging our works in ways that support continued commercial activity for the businesses in the area.

The final construction phases will upgrade the busy pedestrian crossing in Akuna Street in the third quarter of this year with this work also staged to minimise disruption.

Stage 1 works in Akuna Street to connect new footpaths that are safer, more comfortable and attractive are a step closer to completion with the footpath in front of the Waldorf Arcade entrance partially reopened.

This busy city street’s upgraded pedestrian area features new paving, streetlights and landscaping. Stage 1 is expected to be completed by the end of October 2018.

From mid-October, stage 2 of the Akuna Street improvement works will begin on the eastern footpath between City Walk and Bunda Street. This stage of work is expected to be completed in early December 2018. Works have been planned to ensure the safety of pedestrians and maintain continuous access to building entrances in this area.

These improvements are part of the City Renewal Authority’s ongoing works to improve Civic’s public spaces. 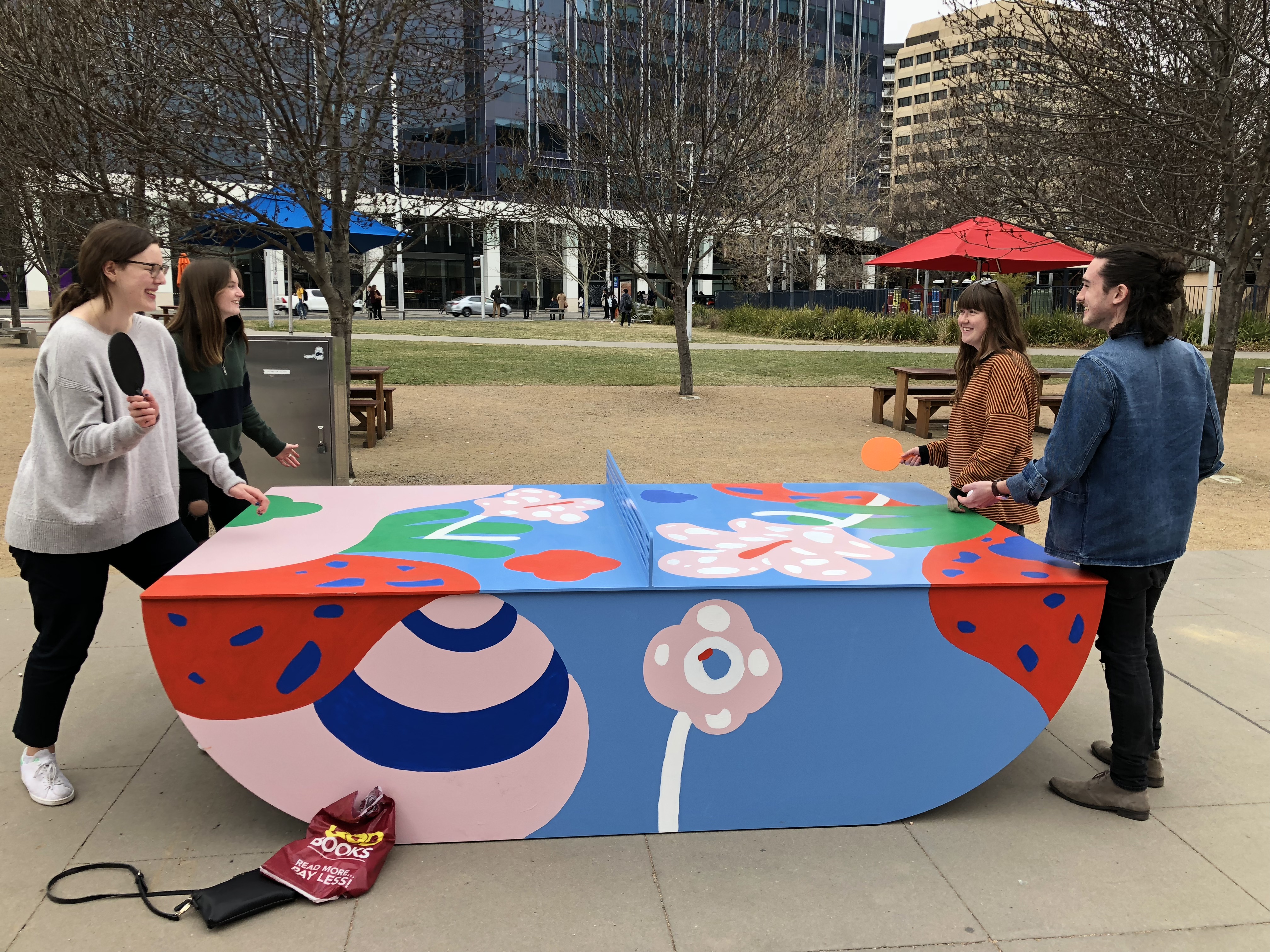 The City Renewal Authority has been working hard to make your city’s paths and public spaces safer, better looking and more enjoyable.

High-quality outdoor tables and benches, upgraded footpaths, ping pong tables and flower planters have all been installed in recent months.

The Pic&Mix tables and umbrellas that have been on the move since 2017 are now in Latin American Plaza alongside two art-covered outdoor ping pong tables. The tables are free for everyone to have a hit, simply bring a bat and ball or pick them up from neighbouring business Kinloch UniLodge and challenge your fellow player to a game.

The previous seating in City Walk has been temporarily replaced with high-quality picnic tables and benches to create a more social environment. Flower planters also add a splash of colour to the streets; just in time for Floriade 2018.

These upgrades are part of the Authority’s wider remit to transform and revitalise the city centre’s public environment. Improving the experience within a place helps us connect to one another and makes our streets more vibrant.

Instead of rushing around next time you’re in the city centre, spend some time using enjoying the colour-filled, newly furnished public spaces.

Public space upgrades for the city have started in Akuna Street

Upgrades to our city’s public spaces have progressed into a second stage as part of the City Renewal Authority’s ongoing works to improve pedestrian amenity, access and safety. 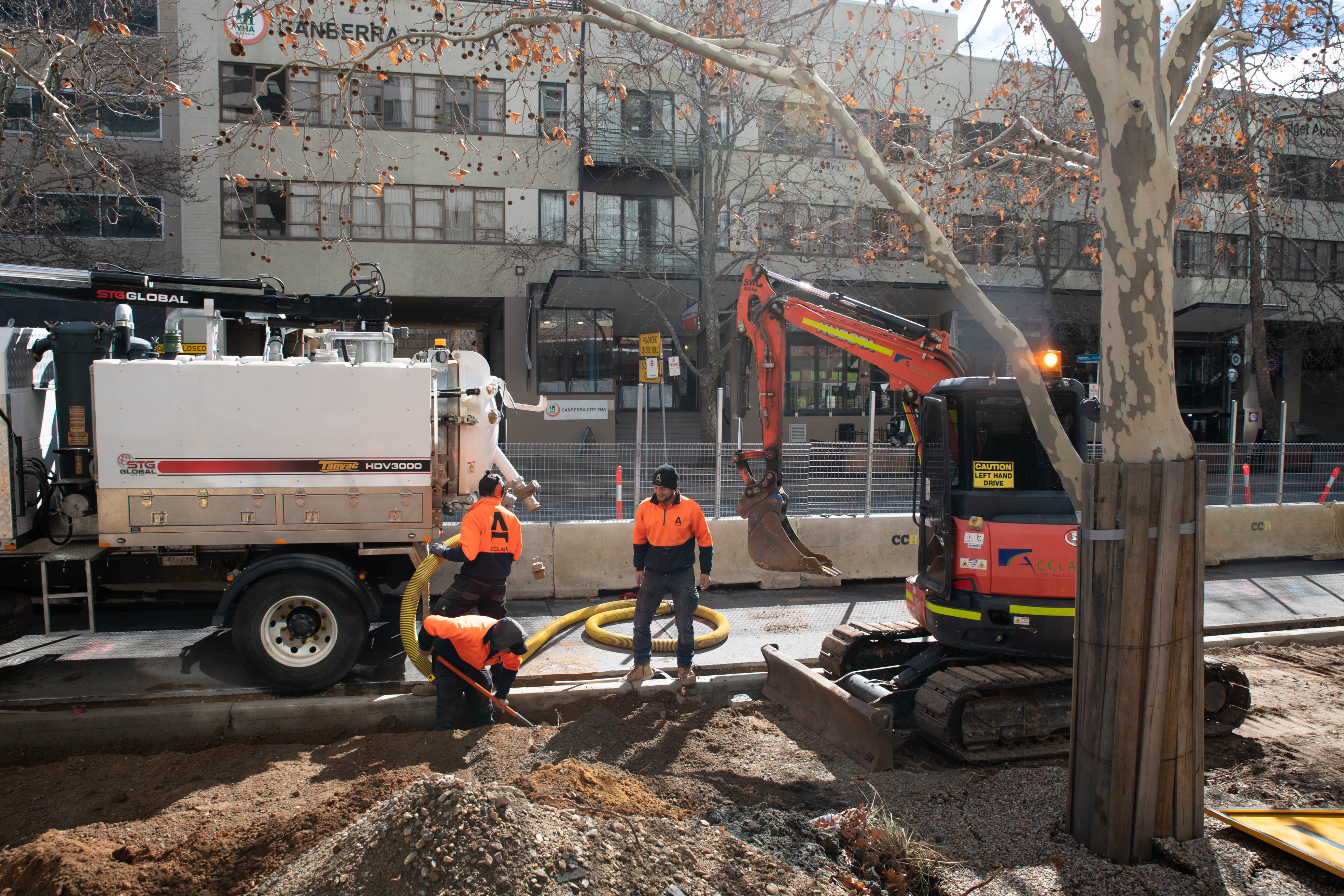 Stage 2 works in Akuna Street have now commenced. An upgraded pedestrian crossing at City Walk and landscaping are part of the new works on Akuna Street.

These improvements to our city’s public spaces are integral to the City Renewal Authority’s wider remit to transform and revitalise the city centre’s public environment.

Upgrades to our city centre spaces

The City Renewal Authority is upgrading the 50-year-old paving on London Circuit between East Row and Ainslie Place. The first stage of the upgrade, around Bailey’s Corner, will open in early May.

The upgrades include new paving, street furniture and street lights to create nicer areas that provide better access. Tripping hazards are being removed to create a more pedestrian friendly and active space. Three additional trees will be planted as part of the project to create a boulevard look for the area.

Upgrades to London Circuit are being done in six stages to minimise the impact on people and businesses in the area. The upgrades will continue the improvements done to the footpath on London Circuit in front of the Legislative Assembly and CMAG and at 221 London Circuit.

The footpath on Akuna Street will also be upgraded as part of the project. This work will begin after the upgrades to the London Circuit footpath have finished.

The upgrades are part of the ACT Government’s urban renewal plan to help the ongoing transformation and revitalisation of the city centre. These upgrades to existing public spaces will continue to be rolled out to make the city cleaner, safer and more accessible.

The City Renewal Authority will start work tomorrow on London Circuit footpath upgrades as part of its public realm improvement program for the city centre precinct.

Stage one of the program will replace and upgrade the existing 50-year-old paving between East Row (Baileys Corner) and Ainslie Place with new paving, upgraded lighting and street furniture.

The $1.1 million project will also redesign the public space outside Bailey’s Corner to remove trip hazards and improve pedestrian amenity.

“Replacing and upgrading some of the aging infrastructure in our public spaces across the city centre will make a big difference to the attractiveness and accessibility of the precinct,” Mr Snow said.

“A high-quality public environment is central to our renewal strategy.

“While we continue to work on the broader transformation and revitalisation of the precinct, these upgrades to existing public spaces will continue to be rolled out to make the city cleaner, safer and more attractive and accessible.“

The London Circuit upgrades will be done in sections to ensure building and pedestrian access is maintained throughout the project, which is expected to be completed in late June.

Some partial lane closures will be necessary during the works, starting tonight with the closure of one lane of London Circuit west bound, directly outside Bailey’s Corner.

Work on the second project in the program, streetscape improvements on Akuna Street between London Circuit and City Walk, will start after the London Circuit work is finished.

The authority will also soon start discussions with property owners and tradersabout potential improvements to Lonsdale Street in Braddon as part of the program.

Further projects will be identified and consulted on as the program advances.

City upgrades are set to begin

The $1.1 million upgrade, between East Row and Ainslie Place, is the first stage of a rolling City Centre Renewal Program.

The immediate scope of work will include replacing the existing 50-year-old footpaths, as well as upgrading lighting and street furniture.

Public access to buildings and transport stops will be maintained at all times, with stage one to conclude in July 2018.

The second stage of the program - Akuna Street from London Circuit to City Walk - will begin after completion of stage one. The program will improve pedestrian access and safety, and revitalise some of the ageing public areas in the city centre.