Manuka Oval upgrades a win for the community 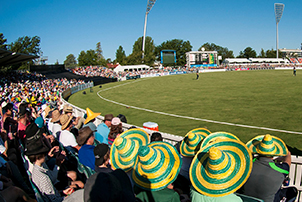 Two new permanent structures at Manuka Oval will provide more shade for up to 1,000 seats.

More improvements to Manuka Oval are coming this year, including two new permanent structures to provide shade for up to 1,000 seats.

The new Media and Function Centre also provides shade for almost 500 seats. Upgrades will also be made to existing player change rooms and umpire rooms to provide better facilities for female athletes.

Manuka Oval is a great place to watch live sport and these upgrades create an even better experience for AFL and Cricket fans.

In a great result for our city, the upgrades have also put Canberra on the map as a host for world-class sport.

Manuka Oval will play host to seven of the world’s best women’s teams in a festival of cricket across three consecutive days.

The opening day of action in Canberra, on Wednesday 26 February, will see 2009 champions and 2018 finalists, England, play in the first match of a double header, followed by 2016 champions West Indies clashing with Pakistan.

Defending champions Australia will be on show under lights on Thursday 27 February, and Friday 28 February will see another double header in Canberra, with South Africa in action in the afternoon game, followed by England and Pakistan.

Find out what’s happening at Manuka Oval at manukaoval.com.au