New and improved playgrounds across Canberra 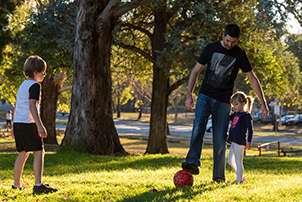 Playgrounds in 32 suburbs across Canberra will receive works

Canberra kids and families will soon benefit from new and improved playgrounds across our city.

Three new Nature Play spaces will be designed in partnership with the community to enhance Eddison Park in Woden, Glebe Park in Civic, and an area near the Farrer shops. Natural play spaces use elements from the landscape, such as logs and rocks, to encourage children to climb, jump and explore.

Five ‘whole of suburb play reviews’ will be undertaken in Richardson, Warramanga, Torrens, Narrabundah and Higgins. Each of these suburbs will receive detailed plans for one new (or re-built) play space and concept plans for the whole suburb.

Upgrades across the city

Playgrounds in 32 suburbs across Canberra will receive amenity upgrades, including shade, seating, landscaping, furniture and paths.

Sixteen older playgrounds that are structurally sound but in need of refreshing will also receive essential works, including repainting the equipment, replacing soft-fall mulch, replacing borders and repairing seating, decks and fences.

Find out more about upgrades in your region: