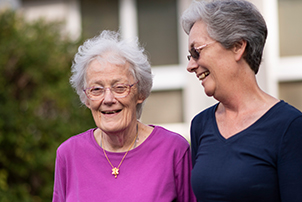 Valerie O'Regan and her daughter Eileen Currie are recent recipients of the Canberra Gold Award.

Woden locals Valerie O'Regan and her daughter Eileen Currie moved to Farrer in 1969 and 50 years later are now recipients of the Canberra Gold Award.

Eileen and her big family moved to Canberra for her father's work in the public service and at that time their house was the most southerly occupied house in Canberra.

“Ours was the first five-bedroom (government) house in Farrer,” Eileen said. "We all loved Farrer and Mum still lives in the house." 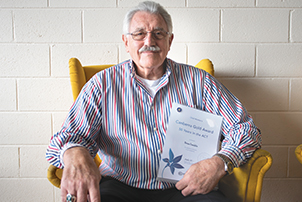 Belconnen's Brian Franklin was another recipient. Brian spent 38 years in the public service, mostly in operational areas, and was also the Canberra agent for the Harlem Globetrotters for 15 years. He is currently the interim CEO of Basketball ACT.

"There were 24 thousand people living here when I first moved. A big night out was the Canberra Theatre or the Albert Hall,” Brian said.

“I remember when I first started playing basketball; there were about 300 members at the time and now we have about 9,000."

Tuggeranong residents Jewel Mangelsdorf and her family were also honored with the award.

"We’ve loved living in Canberra,” Jewel said."We bought a place in Mawson which back then was the outskirts of the city."

“The best thing about Canberra is that it is a great place to live for us as a family because we’re able to live close by and remain well connected."

Find out more about the Canberra Gold Award and how to nominate at act.gov.au/cbrgold