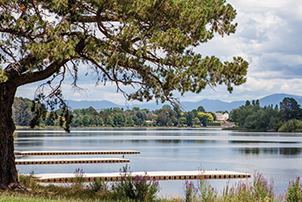 The Vogue India cover and fashion pictorial was shot at Lake Burley Griffin (pictured) and the National Gallery of Australia.

Canberra stars as the cover location for the March issue of Vogue India, as part of a tourism collaboration between Tourism Australia, VisitCanberra and the leading lifestyle and fashion magazine.

The cover and fashion pictorial with Bollywood actress Anushka Sharma was shot at Lake Burley Griffin and the National Gallery of Australia inside James Turrell’s Within Without stunning skyspace in early January. It is just one part of a Canberra content feature staggered across Vogue India channels in coming months that will include a travel editorial piece on Australia’s capital, a behind-the-scenes video and social media posts.

The Canberra promotion is part of a larger content series that has featured in Vogue and Conde Nast Traveller magazines about experiences and destinations of Australia that are new to Indian travellers.

“This collaboration with Tourism Australia and VisitCanberra offered us the perfect opportunity to showcase sunny Australia alongside the season’s brightest fashion,” she said.

The March issue of Vogue India is out today.