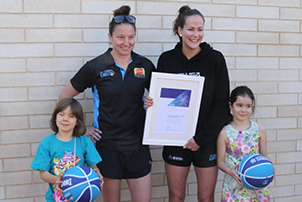 On International Women’s Day we are celebrating the achievements of a group of women who inspire young people in our community and demonstrate the importance of healthy and active living.

This year, the Canberra Citizen of the Year Award goes not only to the incredible University of Canberra Capitals players, but is also awarded to the sporting community who support the team. That includes friends and family, sponsors and supporters from across Canberra who spurred the team to victory.

The UC Capitals inspired Canberrans throughout the 2018-19 WNBL season, as the team banded together in the face of adversity to take the championship with skill, mateship and determination.

The Capitals are important ambassadors and role models for all young people in our community and are evidence of the pathways from the local level to the elite.

UC Capitals General Manager, Lucille Bailie thanked the Canberra community for their support over the course of the team's history.

“It is an honour for UC Capitals to receive this award in the city that has embraced us with open arms. Canberra has shown the nation that world-class athletes with grace and sportsmanship are valued and supported.”

The Canberra Citizen of the Year is presented each year to an individual, or a group, who have made an outstanding contribution to the Canberra community.

The Award has been presented by the ACT Government since 1989, continuing a tradition started by the Canberra Times before self-government.