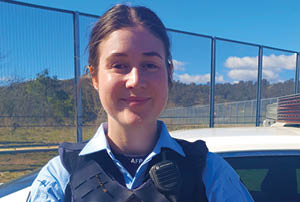 Constable Alice John has been patrolling the Belconnen area for a year since graduating from the AFP College.

“I became a police officer because I was after a job that was exciting and where every day was different, I also wanted to be outside and interacting with members of the community,” she said.

“In my role I get the satisfaction of helping people through tough times and I am always learning.”

Alice’s reckons the view from Stockdill Drive is a hidden gem of Canberra’s North.