The ACT's 2020 Australians of the Year announced 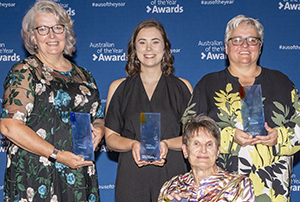 Four inspiring and outstanding Canberrans were announced as the ACT’s Australians of the Year on Monday 28 October, and will now represent the community at the national awards on 25 January 2020.

The 2020 ACT Australian of the Year is women’s rugby league pioneer Katrina Fanning.

Following a successful rugby league and management career, the Wiradjuri woman, 2014 Canberra Woman of the Year and ACT NAIDOC Person of the Year, was appointed to the Canberra Raiders Board of Directors in 2019. Katrina is passionate about Aboriginal and Torres Strait Islander people creating their own solutions.

"It’s a long way from a seven-year-old that the Junee Diesels (rugby league club) found it a bit hard to register," Katrina said of the honour. "That started the rugby league side of things, and that really opened a lot of doors on being able to change little things at a time that make a big difference."

"There’s been so many people along my journey that have done little things to help me out, and that’s made such a big difference, and I just get a real thrill out of being able to do the same for other people," she said.

The 2020 ACT Senior Australian of the Year is leader and disability advocate Sue Salthouse.

"It means a lot, because I’m so proud of people with disabilities but also so sad. So sad because there’s such a gulf sometimes between what I experience as a person with disability and what other people don’t have an opportunity for," Sue said following the announcement.

The 2020 ACT Young Australian of the Year is sustainability advocate Madeline Diamond.

Madeline is the founder and leader of Trash Mob, a youth-led community group that holds clean up initiatives and advocates for waste free solutions. As Executive Officer of SEE-Change, she also engages young people to take grassroots environmental action and provides opportunities for them in the sustainability space.

"What drives me is what I think should drive everyone. And that’s the environmental crisis that we’re in and climate change is an issue for all of us. It’s going to affect everyone of us in the room and all over the world, so that’s my reason," Madeline said when asked what drives her.

"Just start anywhere. The thing you’re most passionate about, start there…. there’s something all of us can do whether that’s big or small, so I urge everyone to take your part in this movement."

Julia has been a foster carer in Canberra for over two decades – supporting 50 babies, children and young people through difficult periods in their lives. As a volunteer crisis carer, and adoptive mother of seven children, she is a passionate advocate for children’s rights and carer support and wellbeing.

When asked why she does what she does, Julia replied: "Because there’s a need. Because unfortunately the need continues and it’s a privilege to be able to help the kids."

"It’s been an extraordinary privilege, it is a lot of work, but it’s also a great joy," she continued. "Each child that leaves, it's a real wrench. But frankly if they weren’t, then you wouldn’t be doing a good job."

The Australian of the Year Awards celebrate the achievements and contributions of people who go above and beyond for their communities and challenge us to make our own contribution.

If you know someone who is making an outstanding contribution to the Canberra community, then nominate them for the Australian of the Year Awards. Nominations are open year-round and one nomination is all it takes for someone to be in the running: https://www.australianoftheyear.org.au/