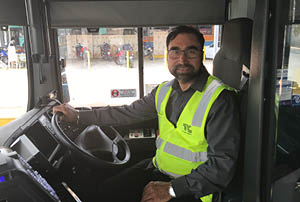 Imagine arriving to collect your child from school to find no sign of him. You scour the school, nearby streets and local shops – but to no avail.

‘It’s OK, he’ll be home later,’ you think. But well after the time you judge your child should have returned if he’d taken it upon himself to catch the bus, you are still waiting. You are preparing to call the police but become conscious of a rumbling noise down the road.

It’s a huge Transport Canberra bus travelling along your quiet suburban street. It pulls up right outside your home. The kindly driver is smiling and soon the only passenger, a small boy, is running into your arms.

This hero driver has delivered your lost child all the way home.

For one Canberra family this emotional rollercoaster was all too real a few months ago.

They were worried when their son wasn’t at school for pick-up, but became seriously concerned about half an hour after the time they judged the boy should have been home if he’d caught the bus.

His mother had just left for a further search and his father was about to phone the police when Transport Canberra driver Jeet Gill pulled up out front, having driven their son all the way home after his shift.

The boy’s father explained that their son had decided to catch the bus home but switched to the wrong bus at the interchange.

‘After realising the situation, the driver drove all the way to our place to drop him off … completely the other side of town,’ the father said.

‘That bus driver went above and beyond, and I hope he gets thanked.’

Our Canberra caught up with this kind-hearted driver, Jeet Gill, at the Transport Canberra depot to ask him about his generous gesture.

Jeet said the child had come to him towards the end of the route to explain that he’d caught the wrong bus and didn’t know how to get home.

The driver contacted base to ask whether it would be OK for him to drive the child home. Transport Canberra approved Jeet’s request and the child directed the driver all the way to his front door, where his father ran to embrace him and to thank this hero who had brought him all the way home safely.

‘The parents were so glad and thankful,’ Jeet said.

‘It was nice to see that they were happy that their kid was safe.’

Jeet loves his work as a bus driver, and says it is terrific to be able to interact with so many Canberrans through his work.

‘I love meeting different kinds of people every day,’ he said.

‘When people say hello, it makes your day.’

Jeet agrees with Kenny Koala and ACT Policing that parents and caregivers should teach their children to remember their home address and caregiver’s mobile phone number, and how to identify a trusted adult if they need help.