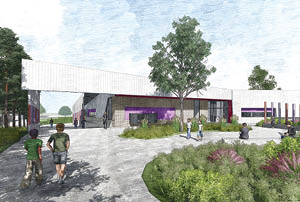 The new school in Molonglo will be Canberra’s 89th public school and second zero emissions school.

Molonglo will have its first high school in time for the 2023 school year.

The high school will be an expansion of the preschool to Year 6 school already being built in Denman Prospect and due to open in time for the 2021 school year.

That first stage of the project will cater for up to 644 students.

The high school will open two years later, integrating with the primary school to form a preschool to Year 10 learning facility.

Once completed, the high school will accommodate about 600 Year 7 to 10 students.

The new school will offer both indoor and outdoor learning areas. It will include:

The double gymnasium will be suitable for roller derby training and competitions, as well as for use by other sports community groups. It will be a significant community and sporting facility which will allow spectators to watch indoor sports and events throughout the year.

It will include two full sized courts with line markings for roller derby and other sports such as basketball, futsal or indoor soccer, netball, volleyball and badminton, seating and additional space for community storage.

Further facilities to be provided in stage one of the school construction includes an outdoor playing field suitable for soccer, rugby league and rugby union and two cricket nets.

There will also be two outdoor hard courts with basketball and netball markings. All of these facilities will be available for community use by arrangement outside of school hours.

The Molonglo region has grown to almost 7,000 residents since 2011 and is expected to see Canberra’s most rapid population growth over the coming decade – adding an estimated 25,000 people by 2029. 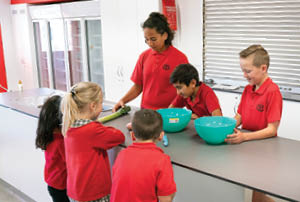 Do you know someone who is making an outstanding contribution to the Canberra community?

We are Canberrans too, redeployed staff bringing additional capacity to Access Canberra.