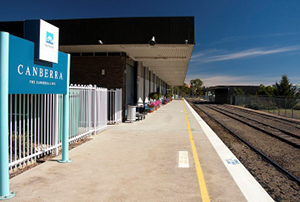 Infrastructure Australia (IA) has recommended the prioritisation of works to enable faster train travel between Canberra and Sydney.

It has added ‘Sydney—Canberra rail connectivity and capacity’ as an item in its annual update to the list.

‘Improving rail services in this corridor would provide more transport options for travellers, improve travel time reliability for rail passengers and reduce pressure on the air corridor,’ the document states.

‘A coordinated approach between the ACT and NSW governments, Australian Government and the Australian Rail Track Corporation] should also consider the potential role of high-speed rail in the future,’ it continues.

IA argues that improving the rail service would create:

‘The number of people living between Canberra and Sydney is forecast to grow by 1.5 per cent each year until 2036, increasing pressure on the road network and airports,’ said Infrastructure Australia’s senior economist Rob Busch.

The ACT Government has been pushing for a faster rail link between Canberra and Sydney for several years.

This year’s Infrastructure Priority List has a strong focus on mitigating the effects of climate change. Making Australia’s infrastructure more sustainable will be critical to protecting the health and wellbeing of all Australians.

Improvements to Canberra’s public transport network made the 2020 list as well, including the development of transit corridors connecting Belconnen and Queanbeyan to central Canberra.

Last year the ACT Government released its Infrastructure Plan for the next decade. The plan sets out a roadmap for a growing city with an emphasis on economic diversity, environmental sustainability and social inclusivity.

The growing Light Rail network, the SPIRE project and the Home of Football at Throsby are just some of the key projects to be delivered from the Plan.

TransportCanberra's newest (and smallest) buses join fleet
TransportHow to stay safe around light rail
COVID-19Businesses getting trained to fight COVID-19
COVID-19A laugh or a sneeze: get tested for COVID-19