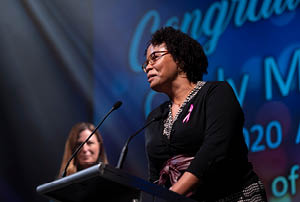 Cindy Mitchell has been recognised for her work supporting women entrepreneurs.

Social enterprise innovator Cindy Mitchell has been named the 2020 ACT Woman of the Year for her outstanding work in empowering women and girls across Canberra to take control of their future by embracing entrepreneurship.

In 2019, Cindy actively supported a network of more than 100 women change makers, entrepreneurs and start-ups. This has created a ripple effect where more than 1000 women and girls have indirectly benefited from her leadership and passion for economic empowerment.

The ACT Women of the Year Awards are held around International Women’s Day each year and acknowledge the outstanding contributions of ACT women who have improved the status of women and girls in the region.

Another 35 women were inducted onto the ACT Women’s Honour Roll, which, for over 30 years, has recorded the names of women who have shaped Canberra recognition and posterity.

ACT Human Rights Commissioner Dr Helen Watchirs is a strong and practical advocate for the human rights of people experiencing disadvantage, including woman and girls, particularly those in ACT detention facilities.

ACT Emergency Services chief Georgeina Whelan was front and centre of the ACT's bushfire response this summer, providing updates to the public over many long days and sleepless nights, and remaining in constant contact with counterparts from other states and territories.The University of Canberra Capitals are one of the most successful sporting teams to come out of the ACT with nine WNBL championships to their name. They are a indomitable force on the court, the Capitals have served as a solid source of inspiration for girls and women in sport. Their exceptional teamwork and spirit also set a high standard for fairness and honour in sport.

The ACT Government has also launched the Equity Together: Second Action Plan (SAP) 2020-2022, the second stage of the ACT Women’s Plan 2016-2026 to guide its actions to improve opportunities for women and girls in the ACT over the next three years.

The Second Action Plan is the result of the generous and valuable contributions made by many members of the ACT community over almost a year of consultation, including a Women’s Summit in October 2019.

As part of International Women’s Day celebrations, the ACT Government will light up the Kings Avenue Overpass Bridge purple on Sunday 8 March.

Within the ACT Government itself, some 65.4% of public service staff are women, 17% higher than the general ACT labour force. Women fill 52.5 per cent of Senior Executive Service roles. Five of our eight Directors-General are women.

This year’s International Women’s Day theme is #EachforEqual, which highlights the essential role that we each play in bringing about equality.

Find more information on the awards and the action plan at communityservices.act.gov.au/women

Or subscribe to the Our Canberra fortnightly news update.