Our thirsty trees need a drink 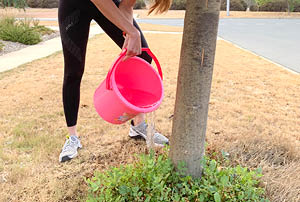 There are simple ways to give your thirsty street trees a drinks.

Older trees around town struggling with the recent drought are being given some extra care in the lead-up to winter with an increase in watering services.

The ACT Government’s tree watering contractors have been active over summer with the watering of more than 22,000 trees under five years old. However, we will be stepping up watering services with trees now to be watered every four weeks until the end of Autumn, rather than every six.

The Government is putting on an additional two watering trucks, which will hydrate up to 6,000 stressed mature trees and remnant native/registered trees that have been identified to be most at risk of not surviving.

As well as extra watering services to older street trees, the Government’s tree team will spread mulch to assist in lowering evaporation and improve water retention within the soil profile.

Despite good rainfall in February, the ground is often so dry that rain runs straight off the surface and a lot of the moisture never makes it down to the tree roots.

In addition to these increased watering services, you can help too. Canberrans are encouraged to water street trees using water that would otherwise go down the drain, including by:

An eight-litre bucket of water once a week could provide enough supplementary water for young trees during dry periods. A larger tree of over five metres may require several buckets once a week. The water should be applied slowly during the cool of the morning or evening, under the tree and close to the trunk to get into the tree roots. It’s better not to dig trenches around trees to catch the water as this can cause damage to the roots.

We especially ask people to look for stressed or struggling trees. There are a few signs that your neighbourhood tree is in trouble including dead branches in the canopy, sparse leaf cover, deep bark cracking and curling, and browning or drooping leaves.

The Government will also be stepping up education and compliance on illegal parking under street trees on public land. Parking under trees can damage the root system, compacting the earth and reducing the tree’s ability to take water and nutrients from the soil.

Members of the community with suggestions on which trees could benefit from being on the extra watering program can visit act.gov.au/fixmystreet with the location of a tree requiring extra attention.

For tips on other ways to reuse water, visit the Actsmart site: actsmart.act.gov.au/quick-tips/water_saving/using_greywater

TransportCanberra's newest (and smallest) buses join fleet
TransportHow to stay safe around light rail
COVID-19Businesses getting trained to fight COVID-19
COVID-19A laugh or a sneeze: get tested for COVID-19