Heroes of the summer named ACT Citizens of the Year 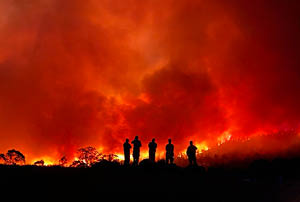 The award recognises all ACT ESA and ACT Parks and Conservation members for their outstanding efforts and cooperation during summer. Photo: Gary Hooker, ACT ESA

All members of the ACT Emergency Services Agency (ESA) and ACT Parks and Conservation Service have been named Canberra Citizen of the Year for 2020.

This significant honour recognises their outstanding efforts and cooperation in responding to the unprecedented conditions experienced during the summer.

The award acknowledges their tireless work to keep Canberrans safe and the sacrifices they have made over the summer months, missing precious time with their families and for many volunteers, their employment.

Commissioner of the ACT Emergency Services Agency Georgeina Whelan said she was proud of the commitment, integrity and determination displayed by every single individual within the ESA and Parks and Conservation teams during summer.

‘This incredible team, of staff and volunteers … worked together as a team of teams to ensure the safety of Canberrans,” she said.

‘It was a true representation of us working together to care and protect Canberra.’

The Canberra Citizen of the Year award is presented each year to an individual, or a group, who have made an outstanding contribution to the Canberra community. It also helps to promote a sense of civic pride.

This year, the award will be presented on Monday 9 March at 6:00pm as part of Canberra Day celebrations.

Canberrans will be able to show their support and appreciation that night, at the Main Stage, John Dunmore Lang Place, Parkes.

They can also write messages of support for ESA and Parks and Conservation members at Canberra Day in the Suburbs ‘appreciation stations’ from 11am and 2pm on Saturday 7 March, or at a Volunteer Family Picnic from 11am on 4 April at Tuggeranong Town Park.

The Citizen of the Year award was first introduced in 1989, continuing a tradition started by The Canberra Times some years prior to self-government.

The Award is presented by the Chief Minister in March each year as part of Canberra's birthday celebrations.

In 2003, the entire Canberra community was recognised for their effort and contribution following the devastating bushfires that caused the deaths of four people and the loss of about 500 homes. The award was, as the Canberra Times put it, “a 330,000-way tie”.

Earlier, in 1985, ‘The ACT Firefighter’ was named winner of the award. That season was the first since the inaugural meeting of the ACT Volunteer Brigades Association.

Learn more about the Citizen of the Year Award at act.gov.au/cbrcitizen