Public transport use on the rise 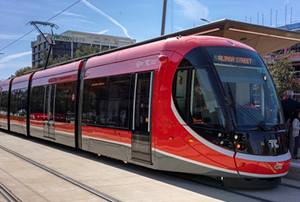 More Canberrans are using buses and light rail to get to work, school and major events around the city.

More Canberrans than ever before are choosing to use public transport, according to Transport Canberra’s latest patronage data.

The highest week of public transport use on record since the introduction of the MyWay was recorded late last month.

More than 514,000 people had caught the bus and/or light rail in thesecond last week of February.

There were over 60,000 boardings recorded on the weekend of the Multicultural Festival in the city (21-23 February). It was also a record for weekend public transport travel since the inception of MyWay.

The new patronage data shows that 36% more journeys were made on public transport for the Multicultural Festival this year compared with the festival weekend in 2019. In the first three weeks of Term 1 2020 there was a 10.26% increase in the number of journeys taken across the ACT compared with the same period in 2019.

New improvements to the bus network are set to begin on Tuesday 28 April 2020. Some of these updates will include:

More details, along with full timetables and updates to school services, will be announced in late March 2020. Read about the improvements in your region at transport.act.gov.au.

Journeys are a measure of public transport patronage. A journey is a customer’s whole trip from origin to destination on public transport, which may include more than one boarding.