The magnificent flying machines of Birdman 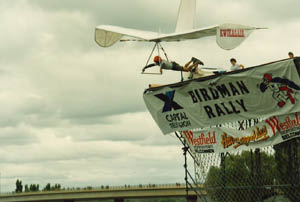 Canberra, are you ready for a blast from the past?

Last held in 1992 in Canberra, the Birdman Rally was a ridiculously fun event held once a year that was not for the faint-hearted.

Courageous Canberrans, and other entrants from elsewhere, attempted to fly for at least 50 metres from a 10m platform over Lake Burley Griffin.

Participants would launch themselves off the scaffolding tower in homemade aircraft ranging from painted cardboard boxes to fibreglass gliders.

ACT Water Police and ACT Emergency Services were on hand to rescue contenders from the water after their perilous plummet from the platform.

To see a similar event that is still operating, you could head to the Moomba Festival in Melbourne, held in March each year, or to the UK or Japan.

Find out more about the Birdman Rally in Canberra at www.archives.act.gov.au.ArchivesACT was established in 2008 as the public access to the ACT Government records section of the Territory Records Office.

Each year on Canberra Day ArchivesACT releases ACT Government archives from 20 years earlier. This year it released stories behind Y2K preparations in the ACT, the Canberra-Nara Peace Park, the Art and Soul project (responsible for the statues through Canberra city) and more.

For more Canberra news, check out these stories: