When heading to Hughes meant packing a picnic 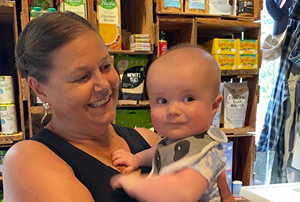 Sue Devic was recognised this week at the 2020 Canberra Gold Awards.

2020 Canberra Gold Award winner Sue Devic originally lived in Griffith in the inner south, but when she was about three, her family moved to the brand new suburb of Hughes.

Friends were shocked by this. ‘Why would you move all the way out there?’ one asked her parents. ‘Nobody will visit you! If they do, they will have to take a packed lunch!’

Now based in Belconnen, Sue was born at Canberra Hospital in 1961 (and is pictured above with ‘great nephew’ Huxley, born here last year).

The Chief Minister’s Canberra Gold Awards recognise Canberrans like Sue who have lived here for 50 years or more. A number of citizens received their Gold Awards at a special ceremony this week.

Sue says she wouldn’t live anywhere else and has made lifelong friends through school, her studies at the University of Canberra and work.

‘I had great opportunities to build a career and do further study here,’ she says.

‘I really appreciate our national arts institutions and the Canberra Theatre Centre,’ she says.

‘I love being surrounded by nature and the walk around Lake Burley Griffin with friends on Saturday mornings followed by coffee at the National Library.

‘I also appreciate the diversity of great restaurants and cafes not only in the major centres, but at our local shops too.’

Moncrieff resident Fiona Allan is another of the 2020 Chief Minister’s Canberra Gold Award winners, having moved to the capital from the UK with her parents in 1969.

The semi-retired teacher rates the ACT’s inclusive and innovative education system as an aspect of Canberra life she most appreciates.

She remembers taking one last drive across Lake Ginninderra before it was filled, and visits to Monaro Mall, then home to the only escalator in town.

‘The height of sophistication was a Vienna Coffee at Gus’s or a milkshake from the Blue Moon Cafe!’ she says.

The award is open to those groups, businesses, clubs, societies, organisations, associations and teams who have been present in the ACT for fifty years or more as at 12 March each year.

Find out more at cmtedd.act.gov.au/communication/gold