Venture through Belconnen on an art tour 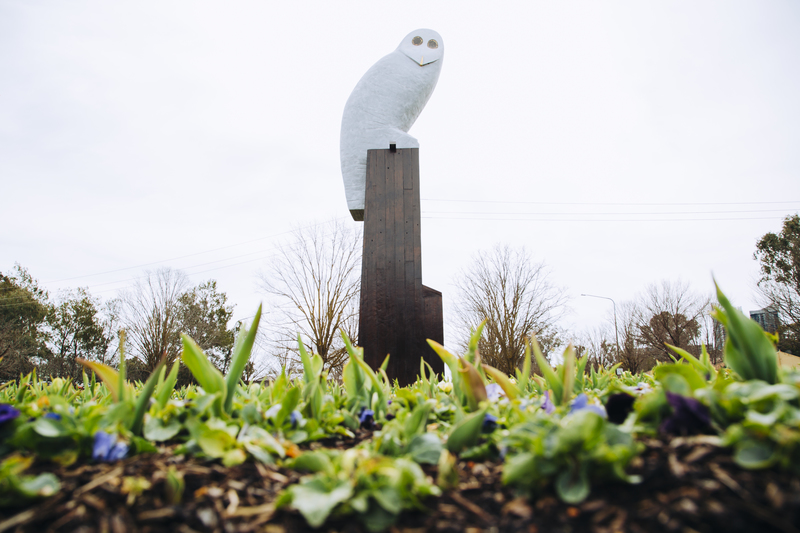 The famous Belconnen Owl is one of the many public artworks that are unmissable.

Go on a journey and explore Belconnen’s eye-catching public artworks, from huge symbolic sculptures to hidden gems waiting to be discovered. In the ACT, public art plays a central role in reflecting our community’s values and experiences and inspires us with new stories and experiences.

Public art makes our open spaces more attractive and engaging. It enhances our experiences of public spaces and the people that inhabit them. The ACT Government public art collection is owned by the community and reflects the value that the Canberra community places on the arts. Here is our list of must-see public artworks in Belconnen.

The newest suburb of Strathnairn in West Belconnen is the perfect place to start your street art tour. The Little Eagle Glyph is the work of long time Belconnen local and female artist, GW Bot. This artwork celebrates the life of the native bird, as its natural habitat is right here in the ACT, above the Murrumbidgee River. GW Bot is a highly regarded Australian artist with over a hundred works held in national and international collections. She works from an artist studio at nearby Strathnairn Arts, a community arts facility operated by the Strathnairn Arts Association. 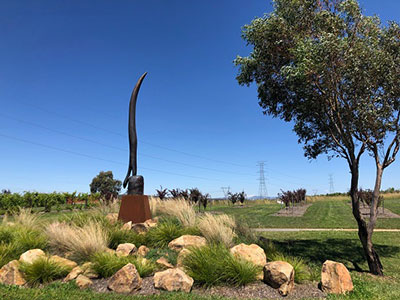 Stop by the Scullin Shops to support the local community

Take a pit-stop at the local Scullin shops, and admire the artwork that is Cumulus Aeronauticus. This artwork, by Geoff Farquhar-Still, is inspired by aviation and the way that planes crisscross the globe daily, weaving lines of contrails and clouds of vapour across the sky. The Scullin shops are also home to an op shop, yoga studio and pizzeria – what’s not to love? 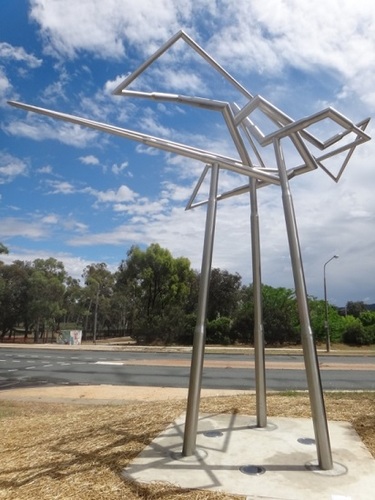 Continue your tour to Belco’s most iconic artwork

The landmark that is Belconnen’s Owl is arguably one of the most iconic artworks in Canberra. The Owl is unmissable as you drive through Belconnen Way and see the way the artist, Bruce Armstrong, has portrayed it as a guardian spirit overlooking its domain.  Pick up some picnic supplies from the Belconnen Markets on your way past.

End with a cycle, stroll, and picnic at Lake Ginninderra

Cycle along the Belconnen bikeway that lines the picturesque foreshore of Lake Ginninderra before stopping for a picnic and to marvel at the many artworks that are in this area. Outside the Belconnen Arts Centre, you’ll find Dancers on a Lakefront which draws inspiration from the native reeds that stretch along the perimeter of Lake Ginninderra. At night the rods appear to glow, drawing the eye to the arts centre and lakeshore promenade.

Continue around the lake towards John Knight Memorial Park where you will find Winds of Light, a sculpture made of steel, brass and aluminium by Peter Blizzard.

Across the footbridge you’ll also find Running Lights, a series of brightly coloured columns that respond to Lake Ginninderra and its environment. They chime and sway, and in the evening, they shine across the water. EventsAll Canberra
How to have a COVID-safe Halloween

How to have a fang-tastic and safe Halloween in Canberra.

A range of certificates will be available to ACT parents who have lost a baby before 20 weeks gestation.

While Canberra’s lockdown has lifted, there are still important health considerations ahead.